Warning: Use of undefined constant ‘WP_DEBUG_DISPLAY’ - assumed '‘WP_DEBUG_DISPLAY’' (this will throw an Error in a future version of PHP) in /home/customer/www/luxurylondon.com/public_html/wp-config.php on line 70
 Nine Lives in Bermondsey offers a unique cocktail experience

A stone’s throw from London Bridge at 8 Holyrood Street in Bermondsey, as the street dives under yet another railway arch, is Nine Lives cocktail bar. But you’ll need to know exactly when to take that hard right into the rather nondescript alley where this new bar’s located in order to find it (make sure you have a GPS or some kind of street map app for guidance).

Upon entering, you’ll be forgiven for thinking you’ve instead arrived at a boutique hotel – albeit one that looks like it may have previously served as storeroom – an effect heightened by the chaise longue that greets you. But press on down the oiled hardwood stairs and the natural pastel warmth of the wood suggests something inviting awaits. And something inviting it is… 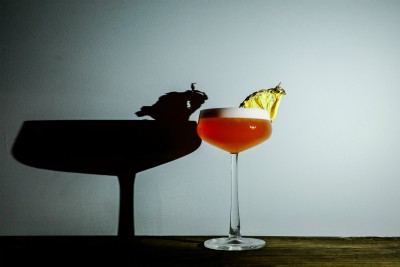 Imagine all the best conversations you’ve ever had and where you had them. Now take those rooms and put them all together… a corner here, a sofa there. Add a games room and a hanging garden within a natural gazebo of bamboo and wicker, and the effect is one where – while every nook and cranny is visible – it somehow manages to remain rather intimate.

And the cocktails? Well, they speak for themselves. Highlights include such gems as:

It seems as soon as Bermondsey’s Victorian brickwork is powerwashed, yet another hipster hideaway is revealed, the harsh pragmatic lines softened by undulating beards and cappuccino froth. A new style of life salvaging the area once again from its own past, a cycle that has happened time and time again in London. Nine Lives certainly celebrates this sustainability and salvaging, presenting it as an upgrade to

cool. The old remade into retro and, thankfully, trendy again.

I asked one of the owners, Tom Soden, to sum up the ethos of Nine Lives in one word. “Good,” he said matter-of-factly. And he’s right. Good ambiance, good drinks, good vibe and good values. This isn’t a preachy ethos, but just enough of one to tip the balance in a decision making process. As Soden said, little reminders that the world doesn’t have to be wasteful by default.

And as I relaxed and began to enjoy the cocktails, everything Soden said seemed to make sense, adding perspective to the reuse, reduce, recycle theme. Furniture, authentic retro recycled. Organic waste from the bar, composted. No tinny modern sound system, but a second hand live music PA that oozes delicious bass tones.

If terms like recycled and sustainable send you running for the hills – assuming, of course, those hills aren’t covered with sustainably sourced trees – then fear not. There’s no need to strap on your sandals when visiting Nine Lives, because while much credit should be given for their ‘no waste’ ethos, this retro chic dive bar with its decommissioned and re-commissioned flare certainly delivers a great cocktail.

Contributor Alastair Sadler has taught salsa professionally in London since 1995 and created the world’s first Salsa Rapido 1-Day Intensive Salsa Course. His hobby is stand up comedy, and in addition to acting as MC of Streetbeat’s Camden Comedy, he regularly takes his show to the Edinburgh Fringe. You’ll find him at www.streetbeat.co.uk