Warning: Use of undefined constant ‘WP_DEBUG_DISPLAY’ - assumed '‘WP_DEBUG_DISPLAY’' (this will throw an Error in a future version of PHP) in /home/customer/www/luxurylondon.com/public_html/wp-config.php on line 70
 The Lobby Bar – A Refreshing Take on the Classics Cocktails in Soho 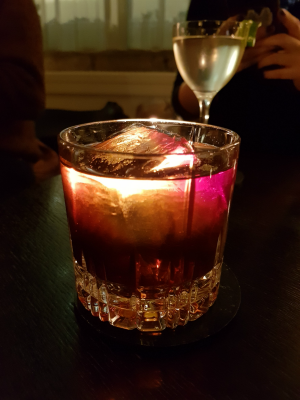 Classic cocktails at The Lobby Bar

When invited to the launch of a revised bar menu at an exclusive hotel in London’s hip Soho area, how could I possibly decline? The opportunity to sample a large selection of new cocktails and existing classics at The Lobby Bar was simply too good an opportunity to pass up.

Just inside Fitzrovia near Soho lies the London EDITION, a boutique luxury hotel (and part of the Ritz Carlton group) in central London that’s been transformed from a Georgian building by Ian Schrager into a unique, modern experience. Upon entering the building, you are immediately greeted by The Lobby Bar with its notable silver-orb (designed by Ingo Maurer) hanging over the centre of the room. Low lighting, green velvet sofas and subtle wooden furniture evoke a more halcyon era. All these trimmings seem at home under the expansive Edwardian ceiling.

The new menu features a delectable range of new takes on old classics such as their gruyere and truffle croquettes and Korean fried wings. The croquettes are a sophisticated take on cheese balls coated in panko breadcrumbs that are significantly enhanced by the truffle mayo. The incredibly moreish chicken wings are reminiscent of Chinese crispy beef, and manage to skirt the fine line of being enjoyable and spicy without being too hot. Other new items on the menu include beef tartare bruschetta with truffle mayo and salmon filled profiteroles that provide savoury bar snacks, especially during the winter months.

It may seem a little odd to take a small diversion here, but I thought I should draw attention to the bar snacks that are provided to each table throughout the evening. The bowls of fruit and nuts are exactly what you would expect, but the popcorn is something special. I don’t usually enjoy savoury popcorn, but this stilton flavoured snack is divine. I barely noticed as I devoured the entire bowl alongside my cocktail and struggled to resist the urge to consume the fresh bowl that was placed in front of me minutes later. If you enjoy a good blue cheese you will be delighted by this simple snack.

The new Havana Moon cocktail is a twist on the rum Old Fashioned. The caramel stout reduction and walnut bitters lend a unique flavour that is both sweet and warming. Just the ticket during the cooler months of the year, and these distinct flavours do not overpower the Havana 7 rum that is the cocktail’s base.

Next up is the Clearer Colada, a lighter take on a classic. If, like myself, you are not the greatest fan of coconut, this more delicate version is sure to delight. The clear taste easily cut through the flavour of the strongest bar snacks, a perfect palette cleanser but, be forewarned: it is easy to forget this drink is alcoholic! It also received the stamp of approval from my companion who enjoys the more traditional Pina Colada.

The Clara Boone is a relatively sweet whiskey sour. The whiskey settles a little in this one but that’s not a bad thing. It means that the flavour builds slowly as you drink it, eventually revealing the delightful smoky taste of the whiskey.

Then we have the Mezcal Mama and the El Presidentissimo. These two cocktails are polar opposites to each other. The El Presidentissimo is a twist on the classic El Presidente, light and floral with a hint of rose water. A drink with an extremely subtle flavour that refreshes the palate. On the other hand, the Mama has a strong mezcal flavour along with a robust lime taste that is tempered by the raspberry to prevent it being too tart or cloying. Much like the Clearer Colada, this drink feels eminently refreshing.

With a new menu that maintains the bar’s staples while adding intriguing new versions of classics, The Lobby Bar is a destination anyone in Soho should visit.

To learn more about The Lobby Bar, visit their website here.

Contributor Tom Wilkinson is a software developer by day and podcaster by night. He hosts a podcast about quality alcohol at https://drwilko.org and co-hosts a talk show podcast with his friend Mike at http://hatofmanythings.com.