Warning: Use of undefined constant ‘WP_DEBUG_DISPLAY’ - assumed '‘WP_DEBUG_DISPLAY’' (this will throw an Error in a future version of PHP) in /home/customer/www/luxurylondon.com/public_html/wp-config.php on line 70
 Merchant House: The Cocktail Book Club  | LuxuryLondon.com 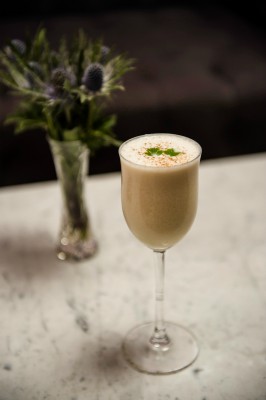 Merchant House of Fleet Street is tucked away in a Harry Potter-style ‘Diagon Alley’ called Bride Court that runs from Fleet to Farringdon streets. Step through the door and we’ve jumped straight back into the 1930s with an art deco high ceilinged bar with no end of Art Nouveau images tiled to the wall. Elegance, yet with a light touch.

Whereas for most the idea of a whisky bar conjures up a rather stuffy image of old leather wing chairs and the faint whiff of cigar smoke (not to mention an elderly clientele), not here! The lush green seating at Merchant House softens the high elegance and encourages you to perch and chat.

Like your whisky straight up? No problem, there’s several hundred to choose from behind the bar. So many that I struggle for the collective noun for whisky? A blur? A gallor? A nother?

And there’s much more to enjoy here than a straight shot, as a great deal of mixing and mingling goes on behind the bar, with eager staff ready to whip-up a range of whisky-based cocktails both classic and modern. It’s that good that you wouldn’t bat an eye if the great Harry Craddock himself, legendary bar man of the Savoy American Lounge during the 1930s, walked through the service door, cocktail shaker in hand.

If you can, try to time your visit for one of the establishment’s monthly Cocktail Book Club evenings, when staff recreate cocktails from a classic book of recipes.

My visit coincided, interestingly enough, with a celebration of Craddock’s The Savoy Cocktail Book. First published in 1930 and considered to be the quintessential cocktail book, it’s a delight to explore. 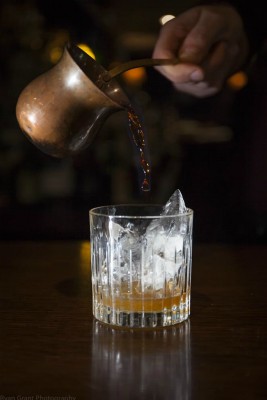 Mixing and mingling at Merchant House

I start with a Sazerac, an old cocktail from New Orleans made with American whisky, cognac, sugar, bitters and absinthe. The result? Almost as delightful as that old quip about absinthe making the heart grow fonder!

Next stop on our journey was to New York for a Brooklyn: Canadian Club whisky shaken with French vermouth plus a dash of the uniquely bittersweet orange

flavoured Amer Picon and a dash of cherry flavoured Maraschino liqueur. (Talking of maraschino, you’ll find one sitting at the bottom of the glass like a musket shot, reminding us that the borough of Brooklyn was bought in 1645 from a native American elder for a gun, a blanket and a kettle.)

“I’ll have what she’s having,” I said in true Harry Met Sally style when I saw a smoking cocktail on the next table. I can’t resist a bit of razzamatazz in a cocktail, so off I went to Japan for a Karyukia: Japanese whisky, plum wine and smoke water, an effect created when cherry wood smoke is piled on top of the glass, spilling over like the morning mist through a Japanese cherry orchard. The smoke triggers many memories – bonfires and BBQs, joss sticks and a myriad of happy times – as its scent lingering in the water. And every time you return for a sip, more memories return.

Merchant House of Fleet Street was a treat, the service was attentive and cheerful. The ambiance elegant without being stuffy, and the drinks were outstanding. So good, in fact, I found myself wondering if the following day I’d need one of Craddock’s signature drinks, the aptly named Corpse Reviver, just to get me going.

Next month’s Cocktail Book Club is Smuggler’s Cove: Exotic Cocktails, Rum, and the cult of Tiki by Martin Cate. I think I’ll go…

Contributor Alastair Sadler has taught salsa professionally since 1995 and created the world’s first full day salsa course: The Salsa Rapido 1-Day Intensive Salsa Course. His hobby is stand up comedy, and in addition to acting as MC of Streetbeat Comedy, he regularly takes his show to the Edinburgh Fringe. You’ll find him at www.streetbeat.co.uk