Wandering around Mayfair, what impresses me most is the area’s celebration of tradition and quality. Look upward and you’ll find the coats of arms and “Royal Warrant by Appointment” on companies’ hoardings. Touchingly, I think of generations of tailors, shoemakers, perfumers, and jewellers whose services have been singled out by the Queen, becoming part of a centuries-old society. Whilst it is inevitable that you’ll encounter retail stores on this walk, I want to draw your attention to the men and women, artisans and craftspeople, tradesmen and merchants, whose talents and hard graft have made possible what you see and touch today.

From Green Park Station, let’s escape the shopping crowd and withdraw to a more discrete London, one experienced by royalty and aristocrats of old. Unless you’re a local in the know, only by chance would you come upon SHEPHERD MARKET. Tucked down White Horse Road, off of Piccadilly, this is a charming piazza with a warren of streets, which even Google Maps street view cannot access. In the 1920s, Shepherd Market was considered to be London’s most fashionable and opulent district by the city’s bourgeois social elite. By the 1970s, it had more salacious connections with politicians and was the setting for rock star Keith Moon’s fatal overdose. Today, it’s a mix of eclectic cuisines, 18th-century pubs, and discreet residences. It’s easy to walk right past notable restaurants, given their unassuming exteriors. There are many excellent options, but for a real culinary twist, check out Polish-Mexican bistro L’AUTRE. Brimming with personality, it’s a kitschy blend of authentic timber beams, an electric fire straight out of the 1970s, and an absurd, fun mix of paraphernalia. As in all the best little places, the proprietor and staff treat you like an old friend. Return here at lunch or suppertime to soak up the ambience.

Pushing on, head for Curzon Street by way of Hertford Street and turn right on South Audley. A quiet road, it is lined with grand mansion blocks – former aristocratic residences, no less. Be on the lookout for the giant twin ceramic elephants that stand sentinel at No. 19. This is THOMAS GOODE & CO, a celebrated supplier of china, glassware, and silver whose prestigious clients have included the Russian tsar and Queen Victoria. With its 13 showrooms filled with various table arrangements, it is worth visiting for the setting alone. A few doors away is GROSVENOR CHAPEL. I am particularly fond of the Dutch-looking building tucked alongside. For those of you in search of Royal Warrant holders, though, you couldn’t do better than JAMES

PURDEY & SONS, up ahead at No. 57, which has been making bespoke guns for nearly two centuries and possesses not one but three Royal Warrants.

An oasis of serenity

Turning away from merchandise for a moment, you’ll find an oasis of serenity mere steps away. Behind Grosvenor Chapel and protected by a wall of mansion blocks is Mount Street Gardens, an attractive open space with large London plane trees and ornamental lawns. Tucked in a corner is the FARM STREET CHURCH, a 200-year-old Gothic Revival church, which still holds a Latin mass for worshippers. 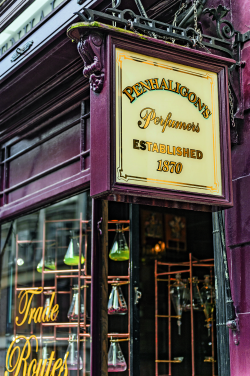 Exit the gardens at Mount Street, opposite the church, and give a passing nod to the Connaught Hotel, where a room will set you back at least £1000 a night. Just up ahead, look to the right, and you ’ll see on the corner, DELFINO, one of the best fish restaurants in London and among the few to offer outdoor dining, which leads us to its other claim to fame, or shame: Charles Saatchi, being a fan of both seafood and smoking, would often dine here; and Delfino became the scene of his horrendous and rather public fights with his wife, Nigella Lawson.

At this junction, you could wend your way to Berkeley Square and on to old and new Bond Streets, but instead I will lead you up Davies Street and steer you right on Brook Street. A remarkable facet to London is how craftsmen and artisans cluster together, remaining indomitably loyal to a neighbourhood, and often a single street. For guitar sellers in London, that street was Tin Pan Alley; for tailors, it is still Savile Row; and for art dealers, it is Brook Street and its environs. (Most famously, Mayfair is home to the art auctioneers Sotheby’s at 34-35 New Bond Street). Brook Street is also known for CLARIDGE’S HOTEL, whose storied past reaches back more than 150 years. But you’d have to be in the know to stumble upon LANCASHIRE COURT. I won’t spoil the surprise, but best to duck down this hidden passageway in the early evening to enjoy the convivial bar atmosphere. Also, for a special treat, I entreat you to head to PENHALIGON’S perfumers at 20a Brook Street, not just for its scents but also for its history, which is expertly divulged by the store’s knowledgeable staff.

Continuing on Brook Street, you’ll pass Fenwick department store on your right and Hanover Square on your left before reaching Regent Street. Turn right on Regent and then take the first left onto Great Marlborough Street. A walking tour of this neighbourhood would be incomplete without a stop at the corner of Kingly Street, where the Grade II-listed LIBERTY LONDON building has stood since 1924.

Alongside Fortnum & Mason, no other department store in London transports you back so remarkably to an earlier era. The mock-Tudor building is constructed from the timbers of two ships – the HMS Impregnable and the HMS Hindustan – and the attention to detail is breathtaking. Inside is a veritable emporium selling everything from perfumes to printed fabric scarves to the smallest haberdashery items. What sets it apart, though, is both its homey feel – there are original replaces in many of the rooms – and the approachable staff, who exhibit a genuine interest and pride in their wares. Liberty is also known for its history of working with great designers – from William Morris and Dante Gabriel Rossetti in the 19th century to Yves Saint Laurent and Dame Vivienne Westwood in the 20th. Come the 1960s, the store experienced something of a renaissance, with designers like Mary Quant and Jean Muir producing the shop’s signature line of fabrics.

Leave by the Carnaby Street exit and you are in one of the more youthful shopping corridors of London Town. The street’s reputation was sealed back in the swinging sixties, when fashion designer Mary Quant opened her shop here, and the Who’s Pete Townshend, the Jam’s Paul Weller, and Jimi Hendrix all became regular fixtures.

Tailor made on Savile Row 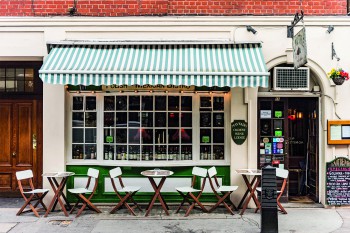 But for a glimpse into another bygone world, which has experienced something of a revival, your next stop must be the golden mile of men’s tailoring: Savile Row. From Carnaby Street, turn right onto Beak Street and right again at Regent Street; then take the first left onto New Burlington Street, and left again onto Savile Row. Make your way to HUNTSMAN & SONS at No. 11. Entering this shop is more like being welcomed into a gentlemen’s club than a mere men’s clothing store. Here, the client is always “sir,” and it’s easy to picture former patrons Winston Churchill, Lord Nelson, and Charlie Chaplin, cane twirling, strolling in, even today. Weekdays at the back of Huntsman may well find a number of impeccably dressed tailors cutting cloth on wooden workbenches much like it has been done for 100 years.

From here, turn into Burlington Gardens, which backs onto the ROYAL ACADEMY OF ARTS. A striking 17th-century mansion nestled in the heart of Mayfair, it hosts some of the best arts exhibitions in London. Avoid the temptation to walk through Burlington Arcade (an upmarket pedestrian shopping corridor under a glazed roof ), and keep moving on to the next corner, where Old and New Bond Streets meet. This route became hugely popular with upper-class residents as a place to socialize in the 18th century, and prestigious and expensive shops were soon established here. Ever since, this locale has held its reputation as the fashionable place for high-end retail, and is one of the most sought after strips of real estate in Europe.

More quintessentially English than shopping, however, is afternoon tea. This is something of a cultural tradition amongst the English upper classes. Nearby, both the Ritz hotel and Fortnum & Mason put on a nice spread of finger sandwiches and scones amidst elegant surroundings, but my personal recommendation is the ENGLISH TEA ROOM at Brown’s Hotel around the corner on Albemarle Street (it is cosier and more intimate). In a city of 8.5 million, though, it is best to make a reservation in advance.

There are two more places of note along the way to Green Park Station that I would like to share. The first is Berkeley Square (pronounced BARK-lee), one of those splendid town squares that pop up on a London walk. This one has been the setting for London Fashion Week and its grand marquee until recently. Many of the town houses that you see here would have opened their doors for after-show parties inviting in the world’s fashionistas.

This area has a reputation for private members’ clubs, and one of its most famous is just off the square at Fitzmaurice Place. The interior of the LANSDOWNE CLUB combines 18th-century grandeur with Art Deco design. Built in 1763 as a private residence, the architecturally exquisite house was established as a social club in 1935.

Whilst this walk doesn’t grant you a pass into the inner enclaves of London society, I hope, as you stroll back around to Green Park, you have a greater sense of the craftspeople, merchants, and society folk who make London what it is.

For more information or to purchase a copy of this indispensible guide to the best walking tours in the capital of the UK, click on the following link:  accpublishinggroup.com