“Luxury private jets” and “affordable” are not usually words you’ll find being used together in the same sentence. But the creative geniuses behind a new start-up called JetClass are on an exciting mission to shatter this long-standing stigma. CEOs and founders Wagas Ali and Vladislav Zenov are the talented minds behind this new venture which in essence allows passengers to book seats on luxury private jets for prices comparative to business class rates. 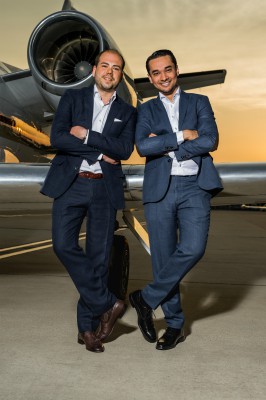 I was fortunate enough to meet Wagas and Vladislav on one of those unusually sunny winter days in London and experienced first-hand the effortless luxury of flying by private jet to Vienna. As the two founders explained the concept from its creation to its fast-expanding future, it did not take long for me to jump on board this shrewd concept.

As I settled into the spacious six-seater jet and left London’s Biggin Hill Airport far below us, I muse over how much of a game-changer this idea is to the aviation world, and to travellers around the globe.

Across from me, Ali and Zenov enthusiastically explained the inspiration behind the creation of JetClass. They tell me their idea stems from the demand in the market to provide an alternative to the declining standards of business class travel and the limited expensive options currently offered on the use of private jets.

Private flying, they tell me, has traditionally been utilized by only a very small minority of travellers. But since their first flight took off on the 22nd July, 2017, JetClass have now performed over 80 flights at prices comparative to booking a business class seat, without the additional cost of membership fees or any other hidden costs.

The convenience of flying by private jet is incomparable, and is one of the prime factors in its appeal. Travellers are able to arrive up to 15 minutes before departure, avoid long waits in security and check-in lines, as well as bypassing queues at arrival gates. The flight itself is smooth and comfortable. Ali explains that the jet is able to fly above the altitude of normal commercial jets, too, thereby using less fuel and creating less turbulence.

The jetClass service is backed by and originates from state-of-the-art technology called Charterscanner, a database which allows access to over 2,000 aircraft around the world, and over two million flights. The software sifts through the data to identify where the demands and trends are, analysing shifts in the market, and harnessing these results to offer the best options for travellers.

As we make our descent into Vienna, Zenov tells me that the technology is so advanced that it can determine the optimal routes and price per seat. In parallel with this technology, they have also connected directly with customers, asking the necessary questions and surveying customers’ needs.

This trial and error process allowed them to design the best model for the JetClass service and drive this forward, opening up private aviation to business class flyers through easily accessible travel engines. Currently, flights operate and connect London, Brussels, Zurich, Nice, Vienna, Milan and several other European cities, with prices starting from as little as €250.

Their unique approach is clearly working, and they already have plans to add flights within the Middle East as early as next year, then expanding to the US shortly after.

Asked about their ‘end goal’, the pair are unanimous, and respond in unison.

And it was abundantly clear as I disembarked, hassle-free, at Vienna International Airport that they are certainly well on their way to achieving this ambition, changing the way passengers travel, and reintroducing a high degree of luxury to the world of aviation.

Jet-setting Contributor Maria Fedele is an adventurous traveller and freelance writer from South Australia who has lived in Paris and currently calls London home.