Warning: Use of undefined constant ‘WP_DEBUG_DISPLAY’ - assumed '‘WP_DEBUG_DISPLAY’' (this will throw an Error in a future version of PHP) in /home/customer/www/luxurylondon.com/public_html/wp-config.php on line 70
 Ida Applebroog at the Freud Museum London | LuxuryLondon.com

Works by the celebrated American painter and feminist pioneer whose work explores themes of violence and power, gender politics and women’s sexuality. 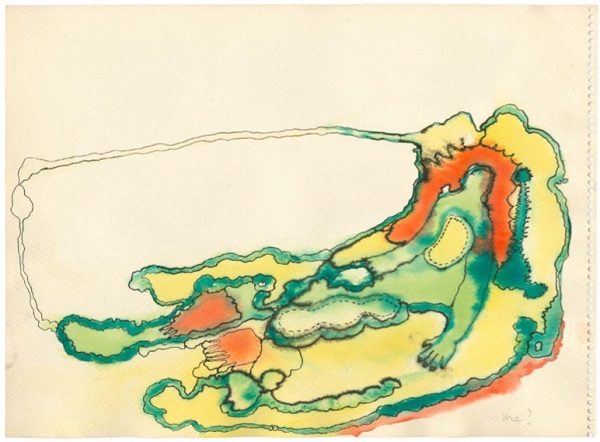 The Freud Museum is proud to present the drawings of American artist, Ida Applebroog, from her Mercy Hospital series.

In 2009, Ida Applebroog’s assistants found a box labelled “Mercy Hospital”, long forgotten by the artist. Inside were drawings executed during a period in 1969 when she was struggling with her mental health. She had checked herself into San Diego’s Mercy Hospital for six weeks where she had created over 100 drawings bound in large sketchbooks. A number of these drawings will be on display in the Freud Museum London.

Born in 1929, Ida Applebroog is a pioneering feminist who addresses themes such as gender politics, sexual identity, violence, power and domestic space in her multimedia artworks. She has spent the past five decades conducting a sustained inquiry into the polemics of human relations. She has an instantly recognisable style of simplified human forms with bold outlines.

The artworks on display at the Freud Museum feature bold line drawings of human, animal and abstract figures with bursts of vibrant colours. They combine black indian ink, pencil, watercolour and pastel. Many are annotated with questions and statements that load the works with additional readings, hinting at the artist’s fragile state of mind. The Museum’s unique space and history offers an intimate setting to appreciate and contemplate these small-scale works and the context in which they were created.

Ida Applebroog’s Mercy Hospital drawings have been often accompanied by famous literary texts selected by the artist. They include Charlotte Perkins Gilman’s The Yellow Wallpaper , a short story describing a woman’s experience of a nervous breakdown; Franz Kafka’s Metamorphosis, highlighting Gregor Samsa’s experience of waking up as something other than himself; and Sigmund Freud’s clinical case studies, namely Little Hans and Dora.

The exhibition will be accompanied by a broad programme of events, which will include lectures and debates on topics including feminism, gender politics, social violence and the relationship between art and psychoanalysis. For further details see >> freud.org. uk/events

Applebroog first came to attention in New York in the mid-1970s, formulating her practice with a series of small self-published books, ‘Stagings’ of identical line drawings presented in succession, evocative of flipbooks or film stills, which she mailed to other artists, writers and individuals. From this beginning, she developed an instantly recognizable style. In an Applebroog exhibition, the visitor becomes an observer and a participant in a domestic drama where fragmented narrative scenes are neither beginnings nor ends to the story.

About the Freud Museum The Freud Museum is located within the former London home of Sigmund Freud, the founder of psychoanalysis, and his daughter Anna, a pioneer of child psychoanalysis. The Freud family settled here after fleeing Nazi persecution in Austria in 1938. The centrepiece of the Museum is Freud’s extraordinary study, containing his iconic psychoanalytic couch, together with countless books and antiquities.

Since its inception in 1986, the museum has developed an international reputation for its collections, research, conferences, events and contemporary art exhibitions. Previous exhibitions at the museum include projects by Sophie Calle, Sarah Lucas, Mark Wallinger, Ellen Gallagher, Tim Noble & Sue Webster and Alice Anderson.