Back in the late 1980s, Gordon Murray conceived a radical idea for the ultimate road car and convinced Ron Dennis to back the project. Launched in 1993, the new car, designed by Peter Stevens, was launched – The McLaren F1. It was to set the record for the world’s fastest production car, reaching 240.1 mph (386.4 km/h). 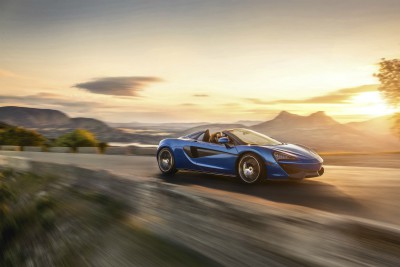 Pretty as a picture: The new McLaren 570S Spider

Since then, progress at McLaren has been non-stop. In the early days it took 3,000 hours to make each carbon fibre chassis for the McLaren F1. It now takes just four hours to create the carbon MonoCell at the heart of the 650S.

Nowadays, McLaren has three ‘ranges’ of cars: the Ultimate Series; the Super Series; and the Sports Series. The first model of the Sports Series – the 570S – was launched a few years back to great acclaim across the world’s press, and stood up well against the likes of the Porsche 911, the Audi R8 and Mercedes AMG GTS.

Now, McLaren has taken the roof off the 570S to create their latest drop-top sports car – the 570S Spider. Debuted at the Goodwood Festival of Speed at the end of June, the hand-assembled 570S Spider is the most attainable model ever and brings supercar attributes such as carbon-fibre construction, a mid-engine layout and extreme performance to the luxury sports convertible segment. The two-piece roof – which takes just 15 seconds to open or close, at vehicle speeds of up to 40km/h (25mph) – is constructed of lightweight composite panels and creates a purposeful, sleek appearance whether raised or lowered.

“The McLaren 570S Spider is the most attainable McLaren Spider to date and adds yet another dimension to the McLaren Sports Series family,” says Mike Flewitt, McLaren Automotive’s CEO. “This is a convertible without compromise. Its mid-engine layout and carbon fibre MonoCell II chassis guarantee the same thrilling dynamic performance and exceptional driver involvement enjoyed in a 570S Coupé, but with the added attraction of a retractable hard-top that delivers the extra exhilaration of roof-down motoring.”

The beautifully finished interior is designed to place the driver at the centre of the action with a perfect driving position. Highlights include hand-stitched leather on the seats, and a centre console with a 10in TFT main instrument cluster and a centrally mounted, 7-inch IRIS touchscreen through which climate control and infotainment functionality are managed. The car comes with six-way-adjustable electric memory seats as standard, although the driver can specify optional eight-way adjustable. In addition, lightweight carbon-fibre-shelled sports seats, the same as those fitted to the McLaren P1, can also be specified.