Lamborghini – a name that generates so many emotions for so many people. A brand that has seen so many stunning machines roll off the production line at Sant’Agata, Italy, since the 60s. Cars such as the Miura, the Countach, the Diablo… all the way through to the current beautiful Huracán and Aventador. 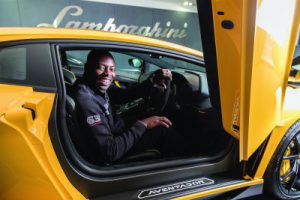 The UK’s leading luxury motor dealer group, HR Owen, is where to go in London if you are wanting to purchase a Lamborghini. Once there, and you have discussed the models and decided, for example, that the Huracán is the one for you, you will be taken for a spin and then given the chance for a test drive with HR Owen’s professional driver, Paul Simon.

When Paul was offered the job of driver for HR Owen Lamborghini in 2005, I thought he’d tell me he jumped at the chance. However, he informs me he actually took two weeks to decide. It was a big step, from driving BMWs (which HR Owen had the dealership for at the time) to driving ultra-luxury cars worth well over £100k. It was a lot of responsibility, but he took the job and hasn’t looked back since.

Toby Howe: Which is your favourite current Lamborghini?

Paul Simon: My favourite current one is the Huracán Performante. It’s not so much the performance, it’s the almost go-kart feeling, you’re one with the car, it feels a part of you. You get more feedback, more enjoyment, you can put more into the car to get more out of it. The V10 is more of a nimble car [than the V12 Aventador]– ideal for driving around London.

TH: Which is your favourite Lamborghini that you have driven?

PS: My favourite personally is the Diablo. I love the way it feels, the rawness of it. It was the last of the Lamborghinis before Audi came in with the Murciélago and started to bring it into the mainstream for everyone to drive. But my heart is with the Diablo.

TH: Has Audi tamed Lamborghini – is it for the good or the bad?

PS: Yes, in certain areas, but they’ve made it a more desirable car for more people. If they hadn’t come in Lamborghini wouldn’t be where it is now. The cars before could be temperamental. With Audi’s input they have made the cars more suitable for everyday use. The V10s you can use every day, whilst you can use the V12s everyday but they are more of a challenge. They’ve done a good job, but have taken away the Italian part in some respects, although they’ve left the Italians to design them – as that’s what they do really well.

TH: What car would be your ultimate dream to drive?

PS: My dream car is the McLaren F1. From the time I saw it I thought there’s nothing else out there. Three seats in a supercar, you sit in the middle and get the maximum feel. If I won the money, that’s definitely one of the two – the Diablo and the McLaren – I would have.

TH: What do you think of the Lamborghini Urus SUV that’s coming out?

PS: I think they need something else. The two cars they have at the moment are really good, but they need something to make more of a family car, more seats to take the rest of the family out. Having the SUV is a good thing as long as it still has the Lamborghini look, because you still want that ‘wow’ effect – not just an SUV with a Lamborghini badge.

TH: Out of the box question – who’s your favourite band?

PS: Favorite all time band is Jamiroquai, because Jay Kay has a passion for cars, so there’s a connection, and I really like the music.

On the road with Mr Lambo

Spending the time with Paul and being out on the road in the two Lambos was a real experience – not just because I was like a big kid with a huge grin all day, but also because I was with someone that has a real passion for what he does. It certainly helped that Paul is a genuinely nice guy that enjoys his job.

It was also a strange experience. Suddenly we were celebrities, as at every stop there was someone with a smart phone wanting a photo – of the car, not us! An experience Paul has to live with every time he takes one of the cars out, and thus has to ensure he never does anything silly in the car.

Paul says he is not a salesman, there are others that do that in the dealership. However, I believe that he is, in many ways, the best salesman that HR Owen Lamborghini has: when a prospective buyer goes out with him, they will see what the car can do when driven by someone who really loves it, and the passion he has when driving it.

My thanks to HR Owen Lamborghini and Paul Simon for bringing the child out in me.